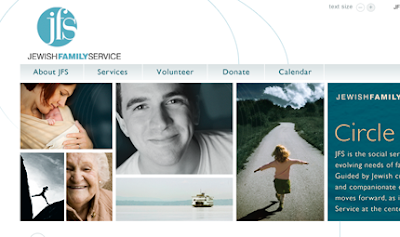 Jewish Family Service (JFS) of Seattle has deep roots in the Puget Sound area with over 117 years of commitment to the community in the North West. JFS has grown from an agency that provided support to Jewish immigrants to a non-profit organization that services many diverse populations in the Seattle area.

JFS’ website was not adequately presenting the mission, scope, and strategy of JFS. Many of their users couldn’t effectively find the information and support they needed with the old design. JFS came to PPMG with these concerns and we worked very closely with them to solve for their complex situation.

PPMG embarked on two parallel tracks to meet the needs of JFS and its constituents. We entered into a Mood Board process to define the visual language of the site, as well as an Information Architecture phase where we defined the site structure and document taxonomy.

For the Mood Board, PPMG chose images and colors that would represent the various populations that JFS serves, as well as photographs of the founding mothers and shots of the Seattle area. This did several things. It gave JFS the opportunity to discuss and define the high level value of JFS and choose a library of images that would evoke appropriate emotional responses from their users. PPMG worked with JFS to create a visual language that would provoke a feeling trust, community, safety, and show concern. Our goal was to connect viscerally to the needs of the site user.

View the Mood Board here >

The IA phase was challenging because of the complexity of JFS’ offerings. We concluded that the best way to meet all site-interaction scenarios was to have navigation by both persona and by service. This created a difficult puzzle to solve, but we were able to effectively create a structure and navigational system that provided easy, intuitive access to all of JFS’s services in a manner that was easy to use and understand. JFS had ample content per page, so PPMG was able to easily flow the existing information into the new design.

The Mood Board and IA phases worked together to create a cost-efficient design process because all of the elements had been defined at a higher level. Repeated touches to the pages during the design phase was not necessary because consensus had been achieved before that phase started.

Through our collaborative efforts, JFS’s understanding of their audience, and PPMG’s expertise, within the first month of the newly designed site launch:
• Average user time spent on the site increased 81%
• The bounce rate decreased 22%
• Page views increased 54%

JFS had a limited budget, complex needs, and a short time frame. PPMG worked closely with the stakeholders through work sessions and presentations to provide a robust website, as well as a meaningful experience for both the JFS staff and the community that they serve.